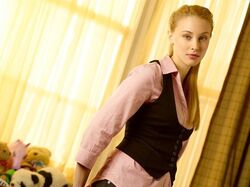 There is the wrong side of the tracks and then there is Cooks Ridge - where Georgia Bravin is from. But Georgia is a ray of light in the dire neighborhood of Cooks Ridge. A 17 year old high school junior with good grades, Georgia manages to keep her head on straight despite horrible living conditions and an even worse father. She does so by spending most of her time at the Conroy house, usually under the guise of babysitting Tommy and Rachel's daughter, Emma. Like most Haplin residents, Georgia has her own secrets. An illicit romance being just one of them...

After being dropped of by her boyfriend who will not drop her off at her house she starts walking though the woods when she hears screams she looks at the Ice House but it starts raining unaware she just witnessed the 8th murder of the Magic Man. the next day she arrives at the Conroys to walk Emma Conroy to school she then mentions to Tommy Conroy that the Lake is frozen over and he asks why she was there last night she then pushes away the question since Tommy then leaves. "In this home on ice"