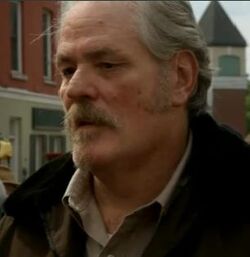 Griffin and Tommy Conroy both go to the Haplin Square to remove the flag John Haplin put up to remember the seven people who were killed by the Magic Man soon they get a call and head to the ice box were the first murder in seven years is found. "In this home on ice"

Retrieved from "https://abchappytown.fandom.com/wiki/Griffin_Conroy?oldid=4462"
Community content is available under CC-BY-SA unless otherwise noted.