I Came to Haplin for the Waters

Edit
I Came to Haplin for the Waters 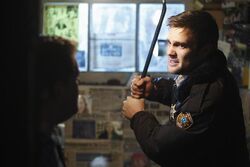 I Came to Haplin for the Waters is the second episode that airs on May 5, 2010 for Season 1 of Happy Town on ABC.

Shaken by a grisly murder at the local pond and his father's bizarre, self-inflicted injury, Deputy Tommy Conroy reluctantly accepts the title of Sherriff bestowed on him by town matriarch Peggy Haplin. However Tommy's shocking discovery of Jerry Friddle's murderer forces him to keep yet another of the town's secrets with mixed emotions. Meanwhile, Henley appears to know a lot more about Haplin's dark side than she's letting on - drawing Merritt Grieves closer - but she's determined to get access to the forbidden third-floor room of the mysterious boarding house, no matter what it takes.

Sheriff Conroy arrives in the hospital, still rambling about Chloe and that "these people, they're wicked". They sedate him before bringing out his hand to reattach it.

At the carnival, Andrew Haplin meets Georgia Bravin and Georgia says she still feels bad that she was at the pond where Friddle got murdered. Shortly after he leaves, one of her friends tells her of what happened to Sheriff Conroy.

Back at the Dot's hotel, Henley is talking on the phone (presumable to her mother, but it's not shown who) about how she was sternly warned not to go to the 3rd floor, and that when she did go upstairs, it was locked. She gets a knock on her door and it's the other residents. They take her outside to a shed, and tell her that it's hers now. She can use the space as a candle workshop till she's found a real location. Outside, Merritt Grieves watching Henley like he's concerned.

Back at the hospital, Tommy, Rachel Conroy, and Dave Duncan hear about the Sherrif's status. They reattached his hand but the ligature wasn't as successful, so it will take time till he's in better health. An MRI comes up clean, so it's not know what pushed him over the edge. Duncan feels he is responsible, since he saw the sheriff before he did what he did, but nothing looked out of place. John Haplin interrupts the conversation, by saying. guy steps in and tells him his mother wants to meet with Tommy

Henley is at Grieves' shop, buying tiny Casablanca figurines. They go over it's memorable quotes before she leaves.

Tommy meets with Peggy Haplin, where they talk about who will be next sheriff. Tommy suggests Rodger Hobbs, but she turns that down, saying that he mooches, and she wants Tommy to be the new Sheriff in his father's absence. Tommy is shocked and initially declines the offer but she convinces him that he'll do great. Officially though, he doesn't accept nor decline the offer.

Back at the police station, Hobbs is talking the squad about the Friddle's case and how baking flour was found on the body. Hobbs somewhat adamantly asks Tommy what the plan of action is, and Tommy says that business will continue like usual and that Hobbs is still in charge.

Dot Meadows arrives at her hotel, telling Henley, sitting a table, that she stepped in three puddles on the way there. She's going on change, and before she does, Henley notices she put a key down on the table. Meadows heads upstairs to change, while Henley steals the key, runs outside, and makes a mold and copy of it in the shed/candle workspace (which has been newly transformed and somewhat organized for use). She melts one of the Casablanca figurines that she bought from Grives. She runs back, but Meadows is faster than her. Right before she walks into the kitchen however, Grieves stops her, and they dance for a moment, enough time for Henley to place the original key back on the table and go undetected.

At a town meeting, Tommy tells Mrs. Haplin that he cannot be sheriff, and Rodger Hobbs would be best. She says "Ok" and takes it unexpectedly easy, however, during a speech after, she appoints and reveals Tommy as the new sheriff, to both the shock of him and Hobbs. He kind of freezes when he takes the podium, throwing Jaws reference out that is met with confusion.

Georgia is at the Hospital, when she asks to borrow a guy's creamer. They make small talk, and she leaves. The other man says that he comes to the hospital for their great tapioka pudding.

Tommy meets with his sister, and Ducan at Ducan's restaurant. They tell him that many people are a mess on the first day or during speeches, but later they redeem themselves.

Georgia, by the sheriff's bedside now, tells him to gte better, even though he's asleep, and puts her hand on him. She pulls it off when she hears his voice say "In my younger days, I felt sorry for myself that i had no gloves, until I met a man wiht no hands." even though he's still asleep. She looks freaked out, looks at her Coffee, which is now the sound of children playing, a clock, and bizarre noises. She starts feeling weird and goes to escape, having hallucinations as she walks down the hospital hall, hearing even more noises. The man who gave her the creamer behind her appears and she runs, eventually making it to an elevator. All looks well till it stops after 4 floors, the lights turn purple and green, and the man shows up on the side. Henley asks if she poisoned her, but he doesn't answer the question. She then asks what she saw in the ice shack, and did she see who killed Friddle? She doesn't answer either, just weeping there scared as a face pushes through the side of the elevator.

She wakes up at the Stiviletto's house, and one of them tells her that Baby Boy Stiviletto wants to say hi. He shows up, says hi, asks her if she's ok, and if she wants some tapioca. Georgia runs out of the place while the rest of them laugh at her.

Tommy is once at the sheriff's beside, talking to him, when the sheriff utters "He'll be back. Now that blood's been spilled again, he'll be back. Serpent always hisses where the sweet birds sings, Chloe". He goes back home where me meets Georgia. Tommy gets in his car, meet with Eli Rogers, where he goes to the Stiviletto's and gets into a fight with them. One os them says that they found Georgia on the floor, they had nothing to do with it. Before Tommy finishes with them, the state lab calls up, saying that the flour found on Friddle was flour mixed with dough that contains fluoride found in New York City tap water. He sees a connection to Dave Ducan, since Ducan imports his water from New York, and goes to Ducan's house, where he goes to grab his drill gun. He pries around in the basement, and uncovers a secret room filled with news articles of the magic man and information on Friddle. Ducan walks in, confesses he killed Big Dave, no remorse or shock. Tommy puts together why he used the railroad spike: that made them look at the Stivilettos, since they hate the Friddles and had spikes as well. Ducan says that Friddle was the magic man, and he finally killed him. The room and wall of information was his own private investigation wall all these years, but Tommy say's he totally wrong, Friddle was not the magic man and that his investigation was ameuteur. Big Dave says that Friddle told him where to find the bodies, but Tommy thinks Friddle was lying, since his life was on the line, he'd say anything. Tommy doesnt' want to arrest him though, so he leaves without doing anything.

Henley finally takes up a trip up to the third floor using the duplicate key she created. Inside are tons of birds in cages making noise. She comes across a panel in the floor and opens it, revealing a box with a strange hammer inside... the top looks like that of a pig, goat, some creature. All of a sudden, an hawkpeers down on her, makes a squawk, and all the birds turn silent.

The next day, Henley goes to buy a car from a dealer a couple towns from Haplin City, saying she'll need it once she reveals herself, to somebody on the phone.

Dan Farmer shows up at the police department, and says he'll help Tommy on the Friddle murder, and that they will catch the guy responsible

Henley has her new car, and is driving back to Haplin, down a wooded road, with the strange hammer in her car, when the hawk from the day before crashes through her windshield, causing her to lose control and crash the car.