In this home on ice

Edit
In This Home on Ice 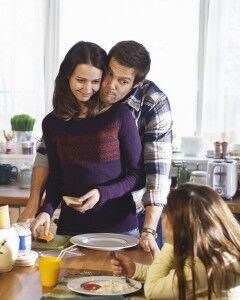 In this home on ice is the Premiere episode that aired on April 28, 2010 for Season 1 of Happy Town on ABC.

Henley Boone has decided to take up residence in seemingly idyllic Haplin, Minnesota just as a shocking murder occurs at the local pond. This horrific crime rekindles Haplin's, known to the people of the community as Happy Town, dark mysteries, including the whispers about an unknown, evil force that has come to be known as the "Magic Man", who is believed to be responsible for the past disappearances of seven Haplin residents. Tommy Conroy, the town's deputy and son of the long-time popular sheriff, Griffin Conroy, must help solve the crime while easing the town’s growing fears and speculations. This is made more difficult when it becomes obvious that the residents are hiding secrets, and that includes its newest resident, Henley.

Georgia Bravin after making out with her secret boyfriend in his car Andrew Haplin starts walking home through the woods. During her walk, she hears screams coming from a little shack out on the lake. Interested, she continues to look out onto the pond when a large bird above her cries out. Immediately after, it starts to pour down rain, causing her to run off. Inside the shack Jerry Friddlea local Haplin resident is being tortured by a mysterious man. The man threatens to shot him if Friddle will not tell him what he wants to know. At first Friddle pleads with the man saying he does not have the information the man is looking for, but soon breaks down telling him he will tell him what he wants to know and whispers something in the mans ear. After the mysterious man gets the information he takes a railroad spike and a mallet and murders Friddle by driving the stake through his head.

Henley Boone arrives at Haplin, Minnesota, where Miranda Kirby picks her up and introduces her to the town and it's people. Henley explains to Miranda she is in Haplin since her mother recently passed away, but while she was alive, spoke highly of Haplin. Henley says that she's going to open a candle shop with the inheritance money her mother left her. During the drive around the town Henley notices a symbol of question mark with a halo on top that has been spray painted in different places around town.

Sheriff Griffin Conroy meets with Tommy Conroy when the police encounter a disturbance. John Haplin is on the streets near a local festival that is soon to take place, the Thaw Festival putting up a banner with the pictures of seven people and the same strange question mark halo symbol on the banner. Haplin starts talking about the "Magic Man", questioning what happened, and why the police didn't solve the case as it is discovered that Haplin's own daughter was one of the victims. A brawl brakes out, as people are mad over the banner that John Haplin had put up, but is quickly stopped and the gathering is disbanded.

Shortly after the incident, Roger Hobbes contacts Griffin Conroy about the murder on the ice that had just been discovered.

Miranda Kirby takes Henley Boone to Dot Meadows house for residence where she is further shown around and gets acquainted with the others staying there, including Mr. Merritt Grieves. Before the end of her tour, Dot advises Henley about the 3rd floor: it is off limits and venturing up there will result in her stay being over immediately.

Henley then gets a phone call from a unknown person and she confirms that her real name is Chloe. She has a flashlight in hand and is about to sneak into the third floor. As she begins to ventures up Mr. Merritt Grieves spots her but just watches as she slowly climbs the stairs.