Edit
watch 01:54
Obi-Wan Finale - The Loop
Do you like this video?
Play Sound
John Haplin 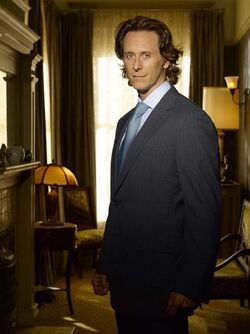 Bearing the town's name doesn't make life any easier for John Haplin. John runs the town's Bread Factory, Our Daily, which employs 12 percent of the town. He is the heir to the Haplin fortune. If his mother had her way, he'd never assume a position of power in Haplin, but with no other choices she is trying to mold John into the man she needs him to be.

John is a good man, but his life was shattered when his daughter, Addie, become the Magic Man's 7th victim. His mother wants him to move on, but being a good parent, he can't. It's a struggle that eats away at him and his family.

John Start's a Riot by putting up a banner to remember the 7 victims of the Magic Man one being his Daughter Addie Haplin but Sheriff Griffin Conroy tells John to take down the Banner."In this home on ice"