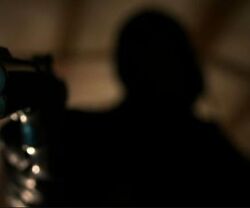 The Magic Man is an Unknown kidnapper who started abducting victims 12 years ago - one per year, for 7 years, then suddenly stopped. His name comes from the ability to make people disappear completely, as if by magic. None of the kidnapped victims were ever found.

He has only been seen by Carl Bravin, who said he wore a top hat and limped with a cane; he also had glowing eyes.

The Magic Man is an Unknown Killer who abducted 7 people over a 7 year period (one per year) and now has returned after a 5 year hiatus.

The town's consensus was that Jerry Friddle was the Magic Man, but sheriff Griffin Conroy's investigation had cleared Friddle. Friddle had an alibi for multiple disappearances (he was in Las Vegas at a family reunion during Billy Mixon's kidnapping and in a hospital for gallstones during Lauryn Ward's disappearance).

After resurfacing, the kidnappings resume. In Polly Wants a Crack at Her, the Magic Man takes Rachel Conroy.

Season 1 Episode 7, Magic man is revealed to be Tommy Conroy's Mother, who was assumed to be dead