Edit
watch 01:54
Obi-Wan Finale - The Loop
Do you like this video?
Play Sound
Tommy Conroy 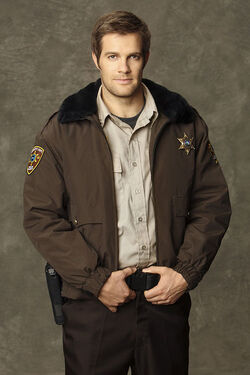 Life in Haplin is easy for Tommy. A life-long resident of Haplin, Tommy flies under the radar of responsibility as one of the town's Deputy Sheriffs - which is an easy thing to do when the town has no crime and your dad is the Sheriff. But Tommy's whole life is changing amidst the town's first murder in 5 years. Thrust now into a world full of responsibility, Tommy quickly becomes the person the town looks to for answers. A role he is hesitant to take on, but is his nonetheless. Now as Tommy searches for answers, he finds himself uncovering some of Haplin's darkest secrets. These secrets are showing Tommy that the small town he grew up in is nothing like it seems.

Tommy wakes up to breakfast with his wife Rachel Conroy & daughter Emma Conroy. He want's to take out his boat but both Sheriff Griffin Conroy and his daughter's babysitter Georgia Bravin say that the weather is too bad and plus his dad needs his help. Tommy and Griffen end up having to stop a riot over a banner that John Haplin put up to remember the 7 people who went missing by the "Magic Man." Tommy gets punched by a unidentified man. After solving the problem, Tommy and Griffin then get a call to come down to the lake. While on their way, Griffin tells Tommy to be more like a cop and stop putting his hands in his pockets stating "you act like you're selling ice cream." Griffin then tells him to watch out for the Vis maker and then mentions a name Cloria. When Tommy ask's who that is Griffin acts as if he did not say anything. They then reach Roger Hobbs who tells them "you're not gonna believe this." Griffin and Tommy step into the ice box and are in shock to see a dead man. Tommy and Root Beer go and tell Donna Friddle that her husband is dead. He then goes with his father to the Stiviletto's where Lincoln Stiviletto reveals that Tommy use to run with the bad boys. His father is still mentioning Chloe or Henley Boone. "in this home on ice"